In the second part of this blog series, the research results concerning the secure USB flash drive Verbatim Executive Fingerprint Secure SSD shown in the following Figures are presented.

The Verbatim Executive Fingerprint Secure SSD is a USB drive with AES 256-bit hardware encryption and a built-in fingerprint sensor for unlocking the device with previously registered fingerprints.

The manufacturer describes the product as follows:

The AES 256-bit Hardware Encryption seamlessly encrypts all data on the drive in real-time. The drive is compliant with GDPR requirements as 100% of the drive is securely encrypted. The built-in fingerprint recognition system allows access for up to eight authorised users and one administrator who can access the device via a password. The SSD does not store passwords in the computer or system’s volatile memory making it far more secure than software encryption.

The used test methodology regarding this research project, the considered attack surface and attack scenarios, and the desired security properties expected in a secure USB flash drive were already described in the first part of this article series.

When analyzing a hardware device like a secure USB flash drive, the first thing to do is taking a closer look at the hardware design. By opening the case of the Verbatim Executive Fingerprint Secure SSD, its printed circuit board (PCB) can be removed. The following figure shows the front side of the PCB and the used SSD with an M.2 form factor.

Here, we can already see the first three main components of this device:

On the back side of the PCB, the following further three main components can be found: 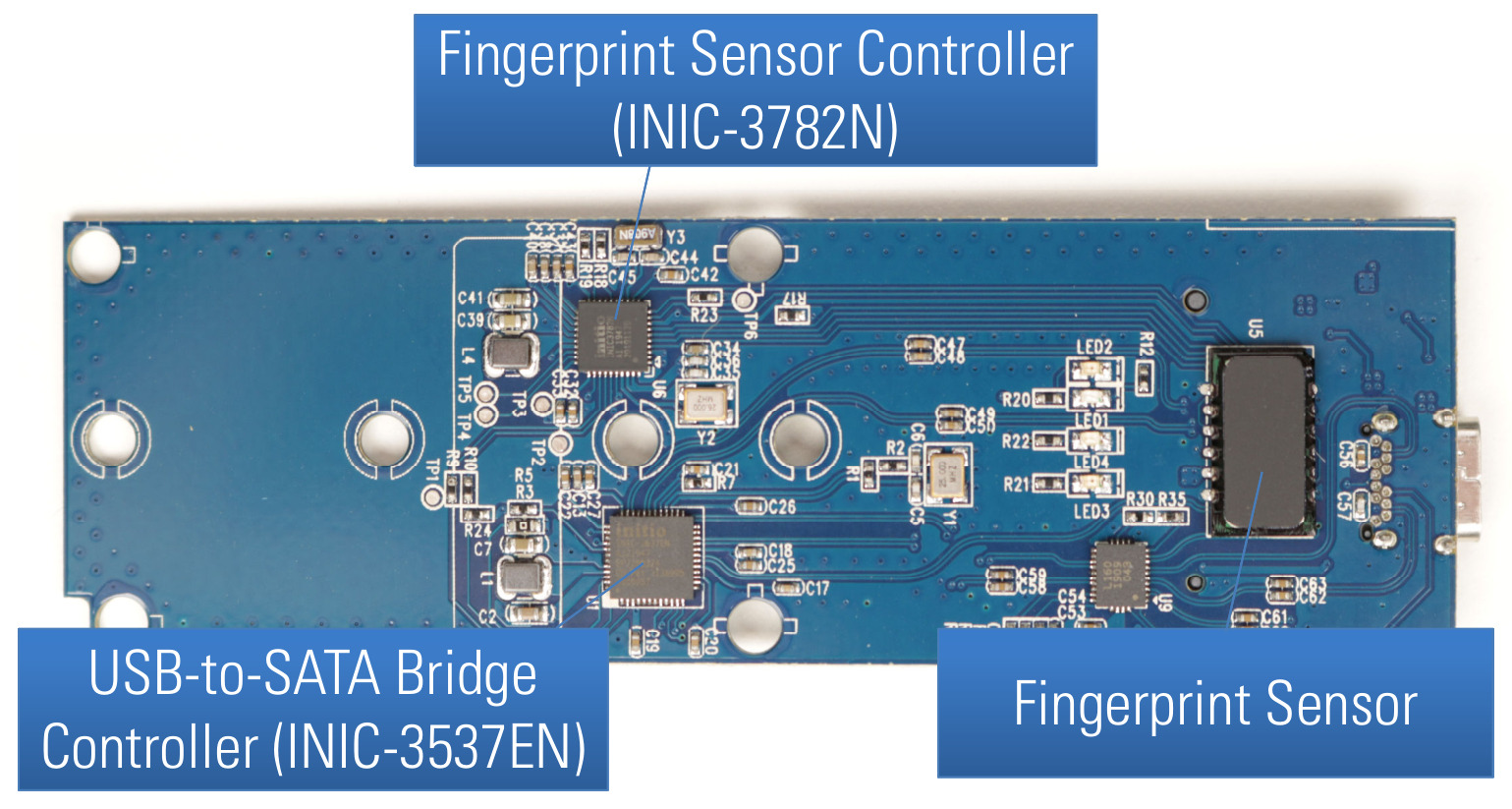 PCB back side of Verbatim Executive Fingerprint Secure SSD

The Maxio memory controller and the NAND flash memory chips are part of an SSD in M.2 form factor. This SSD can be read and written using another SSD enclosure supporting this form factor which was very useful for different security tests.

Just like the Verbatim Keypad Secure covered in the first part of this article series, the Verbatim Executive Fingerprint Secure SSD contains a SATA SSD with an M.2 form factor which can be used in another compatible SSD enclosure. Thus, analyzing the actually stored data of this secure USB flash drive was also rather easy.

By having a closer look at the encrypted data, obvious patters could be seen, as the following hexdump illustrates:

Seeing such repeating byte sequences in encrypted data is not a good sign, as we already know from part one of this series.

By writing known byte patterns to an unlocked device, it could be confirmed that the same 16 bytes of plaintext always result in the same 16 bytes of ciphertext. This looks like a block cipher encryption with 16 byte long blocks using Electronic Codebook (ECB) mode was used, for example AES-256-ECB.

For some data, the lack of the cryptographic property called diffusion, which this operation mode has, can leak sensitive information even in encrypted data. A famous example for illustrating this issue is a bitmap image of Tux, the Linux penguin, and its ECB encrypted data shown in the following Figure. 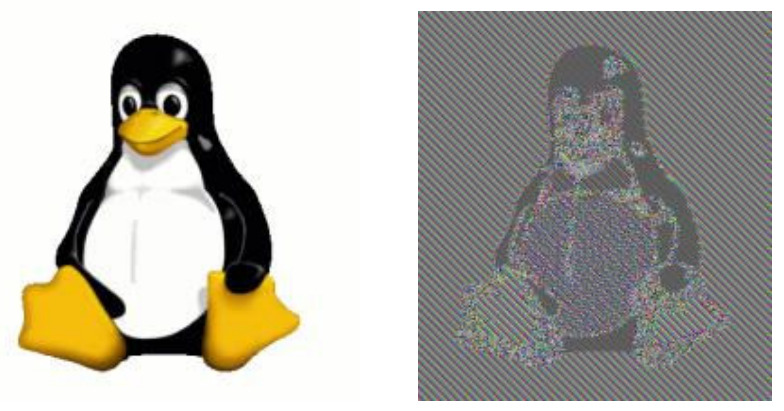 This found security issue was reported in the course of our responsible disclosure program via the security advisory SYSS-2022-010 and was assigned the CVE ID CVE-2022-28382.

When analyzing the firmware, it could be found out that the firmware validation only consists of a simple CRC-16 check using XMODEM CRC-16. Thus, an attacker is able to store malicious firmware code for the INIC-3637EN with a correct checksum on the used SPI flash memory chip.

For updating modified firmware images, a simple Python tool was developed that fixes the required CRC-16, as the following output exemplarily shows.

Thus, an attacker is able to store malicious firmware code for the INIC-3637EN with a correct checksum on the used SPI flash memory chip (XT25F01D), which then gets successfully executed by the USB-to-SATA bridge controller. For instance, this security vulnerability could be exploited in a so-called supply chain attack when the device is still on its way to its legitimate user.

An attacker with temporary physical access during the supply could program a modified firmware on the Verbatim Executive Fingerprint Secure SSD, which always uses an attacker-controlled AES key for the data encryption, for example. If the attacker later on gains access to the used USB drive, he can simply decrypt all contained user data.

This found security issue concerning the insufficient firmware validation, which allows an attacker to store malicious firmware code for the USB-to-SATA bridge controller on the USB drive, was reported in the course of our responsible disclosure program via the security advisory SYSS-2022-011 and was assigned the CVE ID CVE-2022-28383.

The following Figure exemplarily shows exchanged data when unlocking the device with a correct fingerprint. The actual communication is bidirectional and different data packets are exchanged during an unlocking process.

In the course of this research project, no further time was spent to analyze the used proprietary protocol between the fingerprint sensor controller and the USB-to-SATA bridge controller, as a simpler way could be found to attack this device, which is described in the next section.

For the biometric authentication, a fingerprint sensor and a specific microcontroller (INIC-3782N) are used. Unfortunately, no public information about the INIC-3782N could be found, like data sheets or programming manuals.

For the registration of fingerprints, a client software (available for Windows or macOS) is used. The client software also supports a password-based authentication for accessing the administrative features and unlocking the secure disk partition containing the user data. The following Figure shows the login dialog of the provided client software for Windows.

The client software for Windows and macOS is provided on an emulated CD-ROM drive of the Verbatim Executive Fingerprint Secure SSD, as the following Figure exemplarily illustrates. 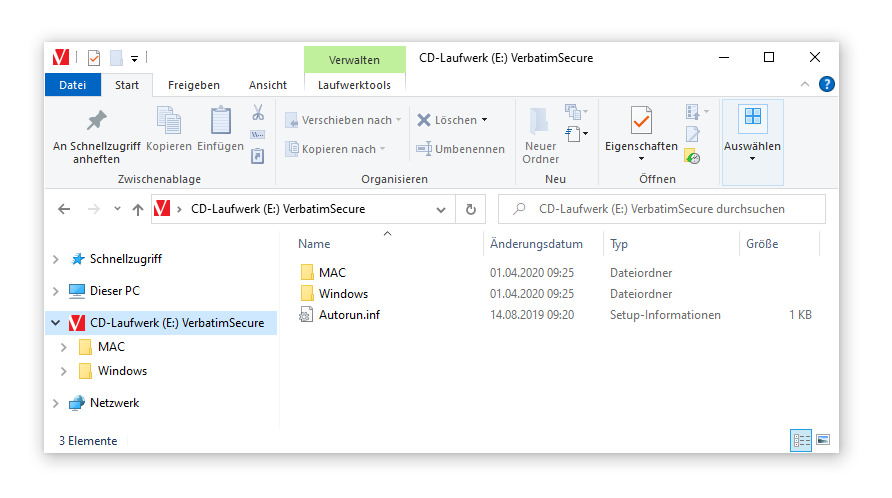 During this research project, only the Windows software in form of the executable VerbatimSecure.exe was analyzed. This Windows client software communicates with the USB storage device via IOCTL_SCSI_PASS_THROUGH (0x4D004) commands using the Windows API function DeviceIoControl. However, simply analyzing the USB communication by setting a breakpoint on this API function in a software debugger like [x64dbg][x64db] was not possible, because the USB communication is AES-encrypted as the following Figure exemplarily illustrates. 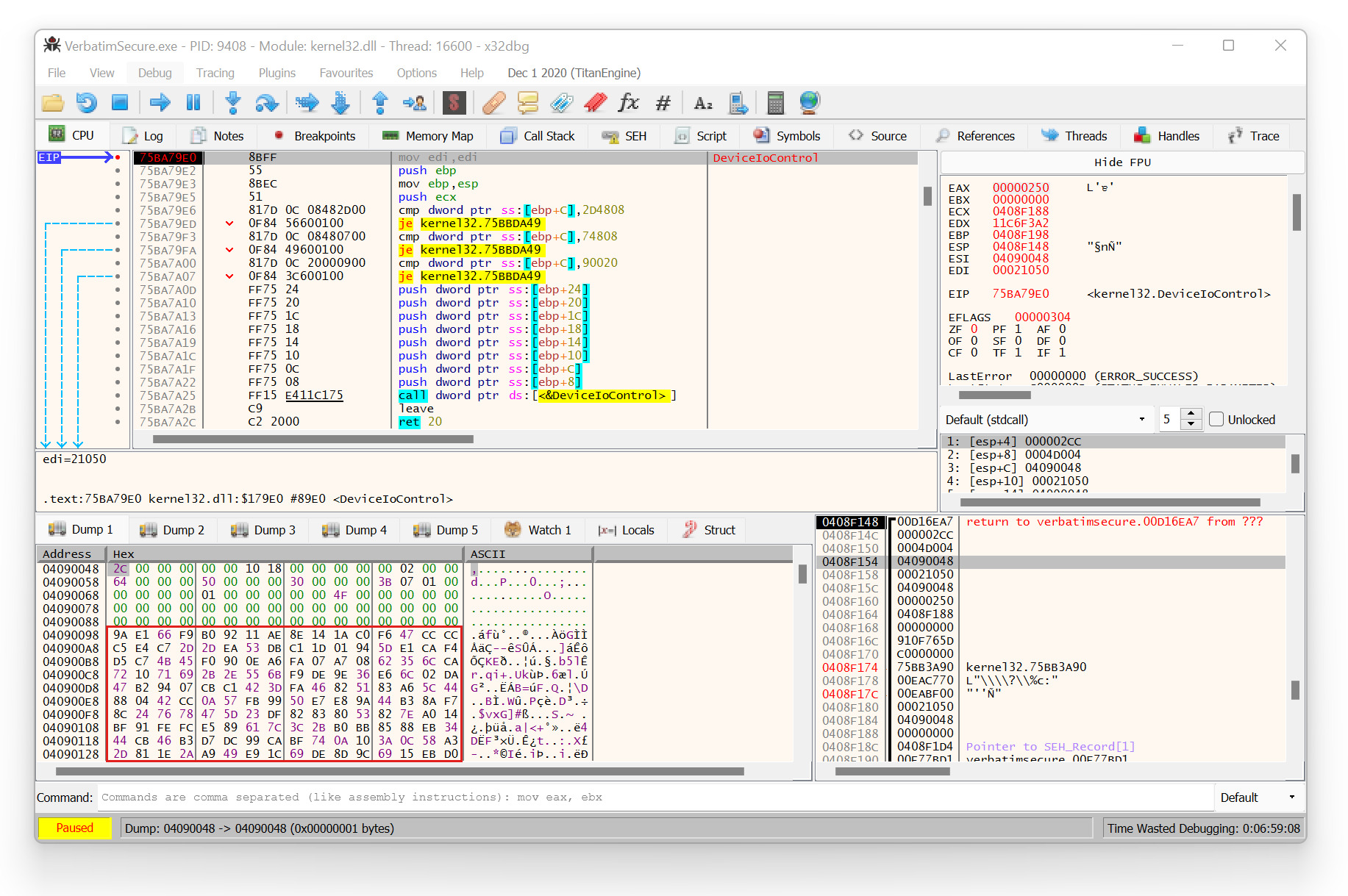 Fortunately, the Windows client software is very analysis-friendly, as meaningful symbol names are present in the executable, for example concerning the used AES encryption for protecting the USB communication.

Here, especially the two functions named CRijndael::Encrypt and CRijndael::Decrypt were of greater interest.

Furthermore, runtime analyses of the Windows client software using a software debugger like x64dbg could be performed without any issues. And in doing so, it was possible to analyze the AES-encrypted USB communication in cleartext, as the following Figure with a decrypted response from the USB flash drive illustrates. 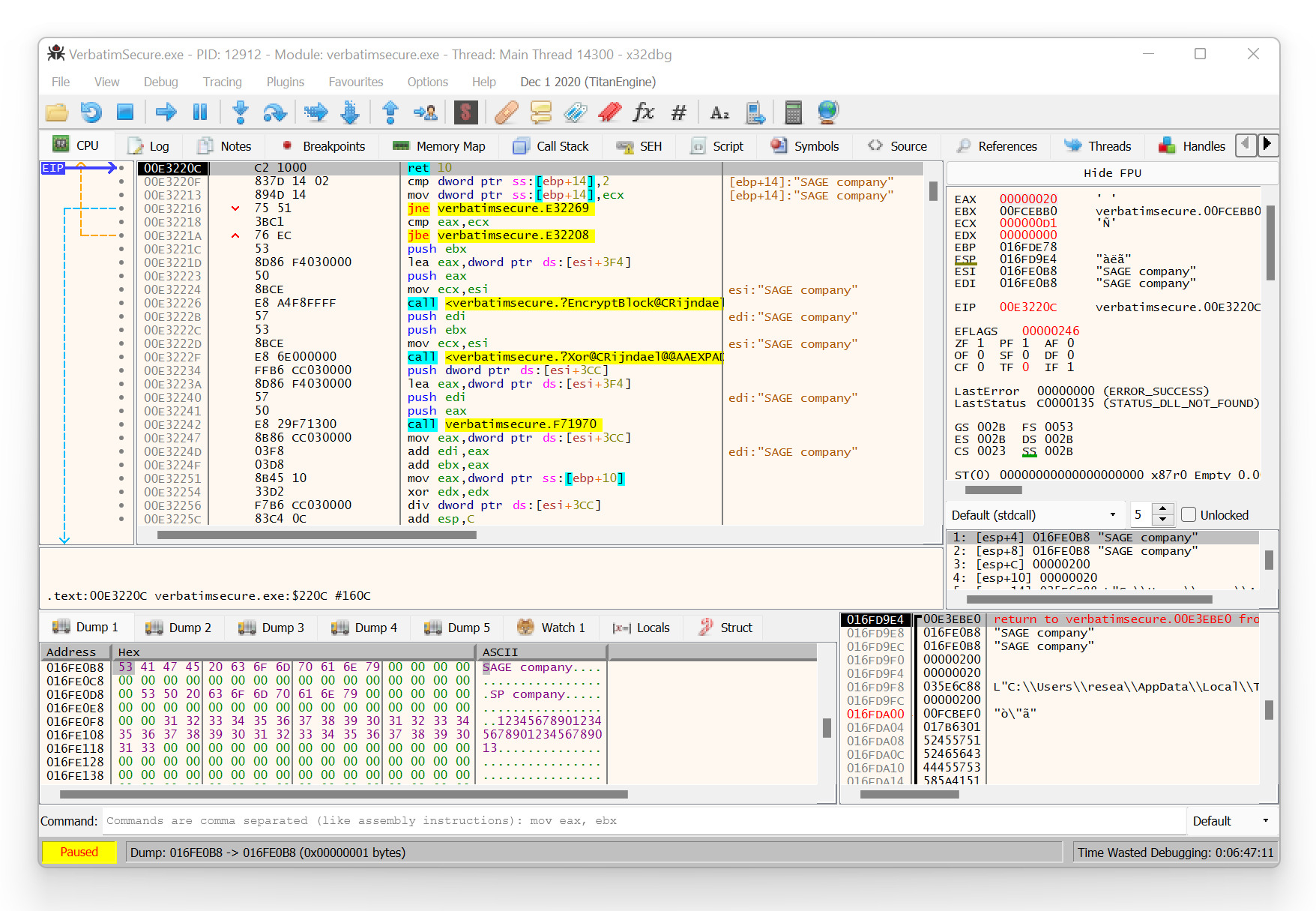 For securing the USB communication, AES with a hard-coded cryptographic key is used.

When analyzing the USB communication between the client software and the USB storage device, a very interesting and concerning observation was made. That is, before the login dialog with the password-based authentication is shown, there was already some USB device communication with sensitive data. And this sensitive data was nothing less than the currently set password for the administrative access.

The following Figure shows the corresponding decrypted USB device response with the current administrator password S3cretP4ssw0rd in this example. 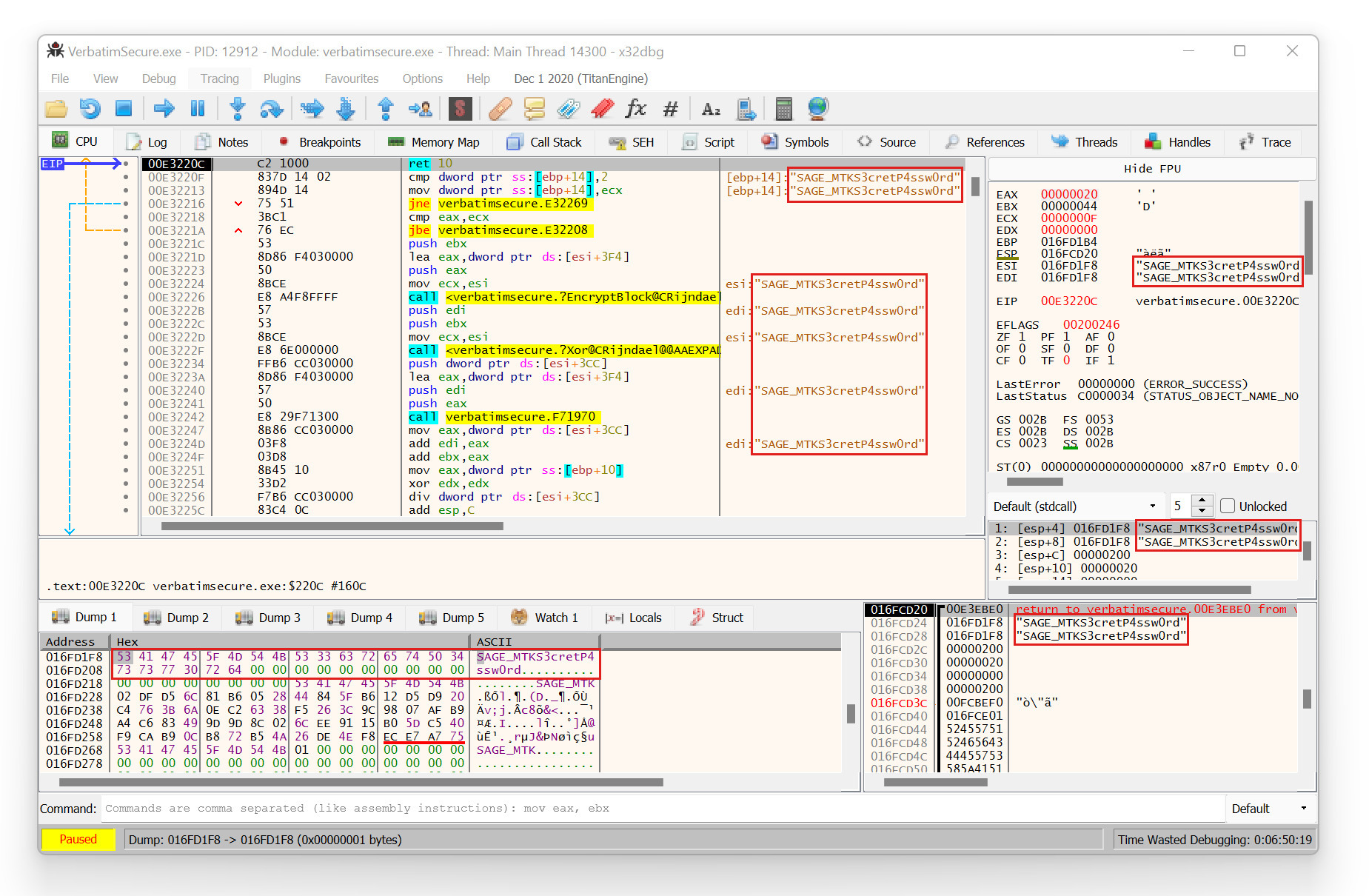 Thus, by accessing the decrypted USB communication of this specific IOCTL command, for instance using a software debugger as illustrated in the previous Figure, an attacker can instantly retrieve the correct plaintext password and thus unlock the device in order to gain unauthorized access to its stored user data.

This found security vulnerability was reported in the course of our responsible disclosure program via the security advisory SYSS-2022-009 with the assigned CVE ID CVE-2022-28387.

You can also find a demonstration of this attack in our SySS PoC video Hacking Yet Another Secure USB Flash Drive.

As described previously, the client software for administrative purposes is provided on an emulated CD-ROM drive. As my analysis showed, the content of this emulated CD-ROM drive is stored as an ISO-9660 image in the hidden sectors of the USB drive, that can only be accessed using special IOCTL commands, or when installing the drive in an external enclosure.

The following fdisk output shows disk information using the Verbatim enclosure with a total of 1000179711 sectors.

The next fdisk output shows the information for the same disk when using an external enclosure where a total of 1000215216 sectors is available.

And in those 35505 hidden sectors concerning the tested 512 GB version of the Verbatim Executive Fingerprint Secure SSD, the ISO-9660 image with the content of the emulated CD-ROM drive is stored, as the following output illustrates.

By manipulating this ISO-9660 image or replacing it with another one, an attacker is able to store malicious software on the emulated CD-ROM drive. This malicious software may get executed by an unsuspecting victim when using the device at a later point in time.

The following Figure exemplarily shows what an emulated CD-ROM drive manipulated by an attacker containing malware my look like.

The following output exemplarily shows how a hacked ISO-9660 was generated for testing this attack vector.

As a thought experiment, this security issue concerning the data authenticity of the ISO-9660 image for the emulated CD-ROM partition could be exploited in an attack scenario one could call The Poor Hacker’s Not Targeted Supply Chain Attack which consists of the following steps:

This found security issue was reported in the course of our responsible disclosure program via the security advisory SYSS-2022-013 with the assigned CVE ID CVE-2022-28385.

In this article, the research results leading to four different security vulnerabilities concerning the Verbatim Executive Fingerprint Secure SSD listed in the following Table were presented.