An external, unauthenticated attacker is able to send specially crafted SIP messages, that pretend to originate from Microsoft and are therefore correctly classified by the victim’s Session Border Controller.

As a result, unauthorized external calls are made through the victim’s phone line (toll fraud).

The research was also presented at this year’s DEF CON Hacking Conference in Las Vegas. The slides are available on the DEF CON media server.

Microsoft Teams can be extended for making and receiving external phone calls e.g. using the Microsoft Teams client like a softphone. For enabling this, Microsoft Teams needs to be connected with a Public Switched Telephone Network (PSTN) by one of the following options:

More information about Microsoft Teams PSTN connectivity can be found in the Microsoft Documentation.

Since this blog post focuses on the Direct Routing option, we will go into more detail about it.

For enabling this, the operation of a dedicated Session Border Controller (SBC) is needed. The following figure shows a basic sample architecture for this scenario:

In the author’s experience, one of the common SBCs are devices from AudioCodes. Therefore, we chose an AudioCodes SBC as an example to analyze Microsoft Teams Direct Routing PSTN connectivity.

Analysis of a recommended configuration

AudioCodes published configuration guidelines for the integration with Microsoft Teams, which are results from the certification process and interoperability tests by Microsoft. These guidelines include some carrier specific guides as well as a gerneral configuration note.

In addition, AudioCodes provides a configuration wizard, where all requirements can be clicked together resulting in a final configuration, as the following figure illustrates: 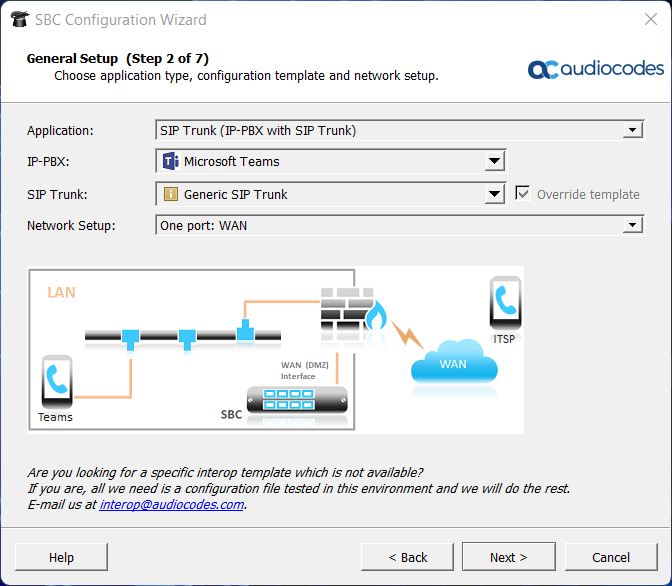 Therefore, a configuration recommended and certified by the manufacturer is used as the basis for the security analysis.

The communication between the Microsoft SIP proxies and the SBC is done with the Session Initiation Protocol. When a call is initiated from the Microsoft Teams client, the configured SBC receives the SIP messages of the call.

After receiving a SIP message, the SBC handles this by configured actions and call routing rules e.g. establish a connection through the configured PSTN carrier. In this case, the SBC acts as a so-called back-to-back user agent (B2BUA) between the Microsoft SIP proxies and the PSTN carrier.

Before a SIP message is handled by the routing policies, it must be first classified by the SBC.

In the configuration recommended by the manufacturer, this classification includes the following conditions:

After reviewing the rest of the configuration, no further conditions or authentications are required for correct classification of SIP messages received from Microsoft.

Due to the lack of authentication, the attack idea is to send specially crafted SIP messages pretending to be from Microsoft, get correctly classified by the SBC, and finally establish a connection through the victim’s PSTN carrier.

For a successful attack, however, the FQDN of the SBC must be known. This can be obtained e.g. from the common name or subject alternative name value of the X.509 certificate of the exposed SIP-TLS service:

As a proof of concept, the following SIP call flow was defined in an XML template, which can be used by the open source tool SIPp:

When connecting to a SIP-TLS service, SIPp requires an X.509 certificate. In fact, this is not required for the actual TLS handshake, and therefore a self-signed certificate can be used. The proof of concept XML template can then be executed as follows:

As already seen in the tl;dr section, the SIP messages were correctly classified and an external phone call was initiated.

The call flow of the attack from the SBC’s point of view is shown in the following figure: 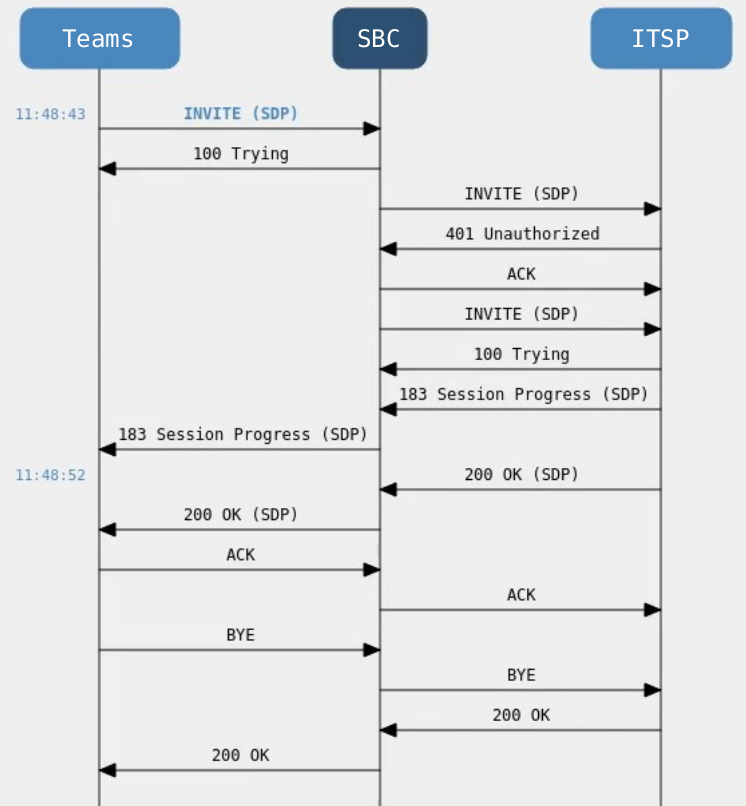 SIP call flow from the perspective of the SBC

This is a good time to consider the implications of such an attack.

First of all, the obvious impact with this issue is that an attacker is able to impersonate the victim and make calls on their behalf, e.g. CEO fraud or other social engineering attacks.

Second, the worse and common attack is toll fraud. In this case, an attacker initiates an external phone call through the victim’s PSTN carrier with the destination of a premium phone number. This premium phone number is under the attacker’s control, and therefore he receives the incurred charges, as illustrated in the following figure:

In order for the security issues to be addressed, we have reported the vulnerabilities to AudioCodes Ltd. according to our Responsible Disclosure Program. AudioCodes Ltd. responded after our vulnerability report and provided several workarounds during the disclosure process, which are described below. 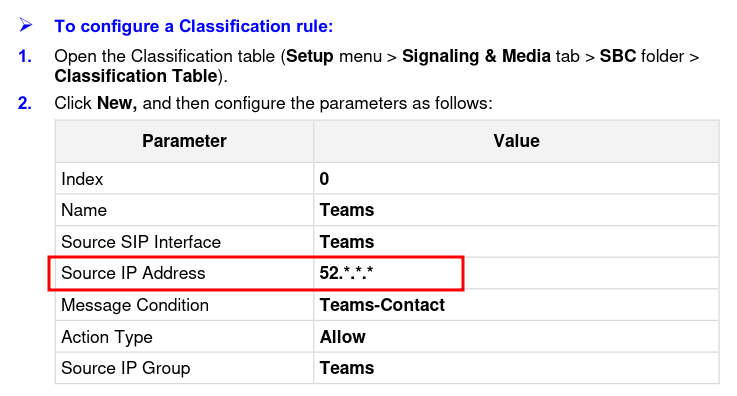 This IP filter means that classification is only successful if the incoming SIP messages have a source IP from the network 52.0.0.0/8.

However, the addresses on this network are not exclusively assigned to Microsoft.

The IP address assignments in AWS are documented and can be queried from https://ip-ranges.amazonaws.com/ip-ranges.json:

So for an attacker, it is possible to allocate an IP address of the allowlisted IP range 52.0.0.0/8 in some AWS locations:

This IP address can then be assigned to an EC2 instance in AWS and finally the attack is still possible.

Microsoft Teams Direct Routing supports mutual TLS authentication, which was also recommended as mitigation to the described attack by AudioCodes Ltd. This means, that the SBC is able to request and then validate the X.509 certificate of the Microsoft Teams SIP proxy for incoming SIP connections.

Mutual TLS in a nutshell

One important check at certificate validation is the comparison of the requested hostname to the Common Name (CN) or Subject Alternative Name (SAN) of the X.509 server certificate.

For enabling mutual TLS for Microsoft Teams Direct Routing, the SBC has to trust the following two certificates:

However, both certificates are widely used. For example, the following image is showing the signing tree of the Baltimore CyberTrust Root certificate: 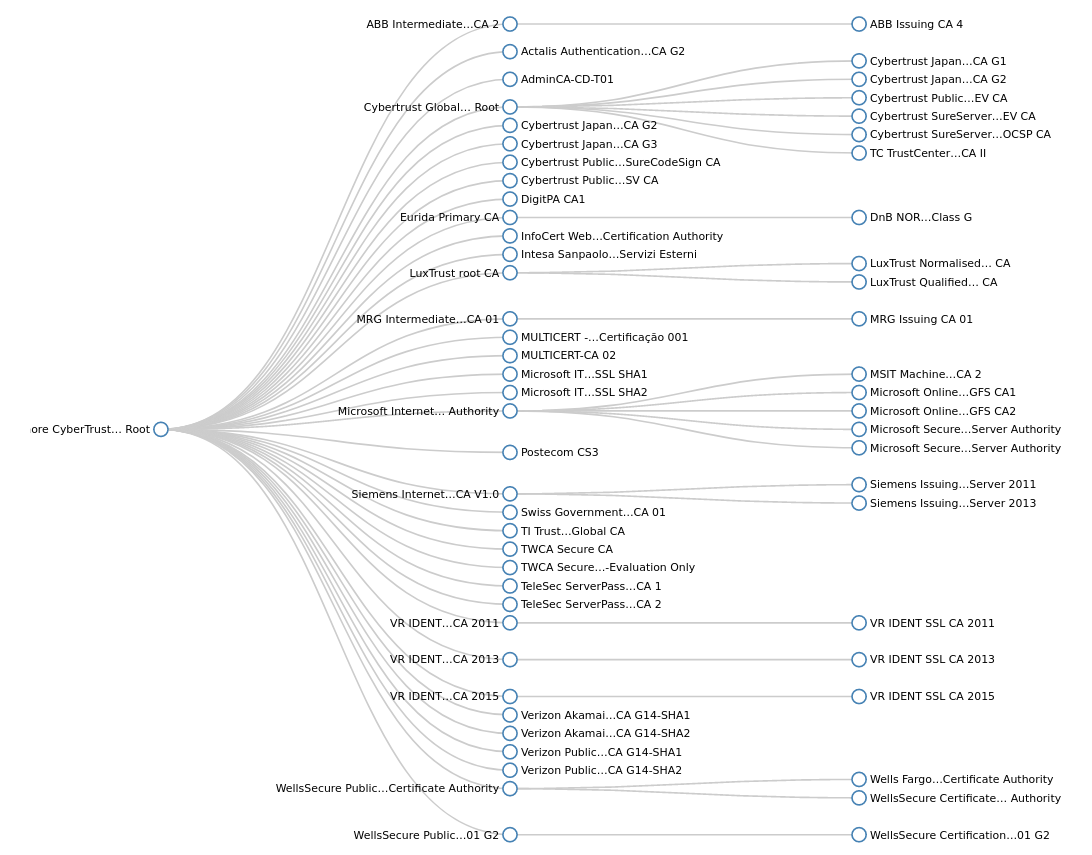 Thus, an attacker is able to request a signed certificate for an arbitrary FQDN from a CA which ultimately signs the certificates by DigiCert Global Root G2 or Baltimore CyberTrust Root. Finally, the attack is still possible, even if mutual TLS is enforced on the SBC.

More information about mutual TLS can be found in the Microsoft documentation.

After we reported that the attack is still possible, AudioCodes Ltd. responded with the following statement:

The AudioCodes Configuration Guides are focused on interworking and only describe the basic security rules.

However, filtering the incoming party number is just a minimal security improvement, since the phone number can often be easily obtained by simple web search. Next, the SBC security and hardening guideline would also not prevent this attack without keeping Microsoft Teams Direct Routing working.

In addition to these recommendations, we noticed that AudioCodes added the additional section Configure Firewall Rules (Optional) in its guideline: 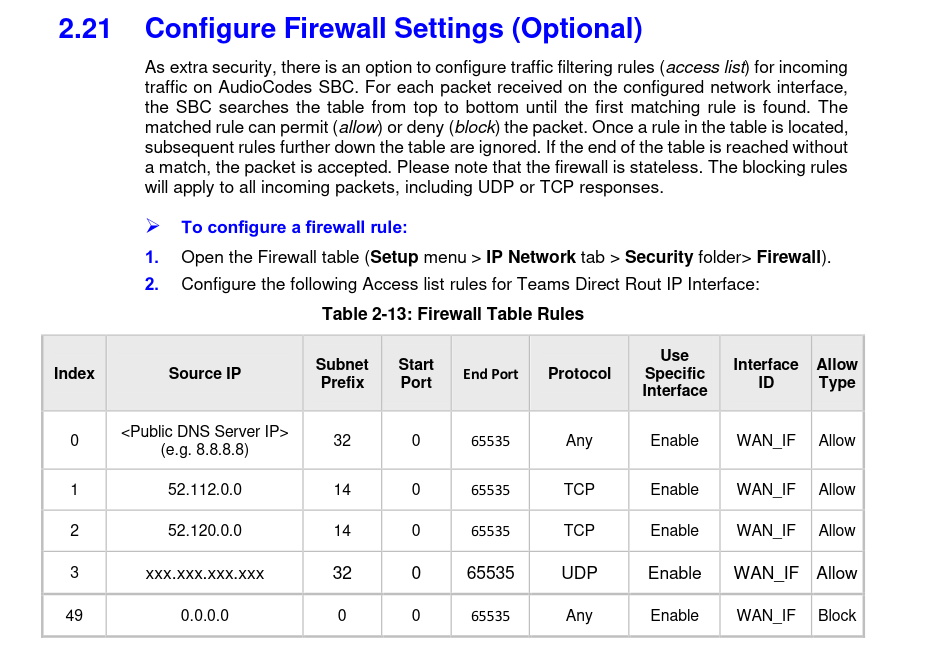 If configured correctly, these firewall settings would only allow incoming TCP traffic from the documented Microsoft Teams SIP proxies, which indeed will effectively prevent exploiting the demonstrated attack.

However, it should be noted that this section is marked as optional by the manufacturer, and that the firewall settings are also not applied, if the configuration wizard is used.

In general, the described issues are affecting all Microsoft Teams Direct Routing installations and SBCs. Please be aware that the AudioCodes SBC is just an example in this case.

Therefore, we also submitted a report to Microsoft about the security vulnerability and requested the implementation of proper authentication. For example, application-specific SIP digest authentication, which would allow a long password to be defined for SIP session authentication. Also, signing the Microsoft Teams SIP proxies with an exclusively used and dedicated CA would secure mutual TLS authentication.

But until now, this case is still open.

Currently, the only effective way to secure the SBC in combination with Microsoft Teams Direct Routing is defining an IP filter, only allowing incoming TCP traffic to the corresponding SIP service from the documented Microsoft SIP proxies:

In addition, some SBCs support static SAN filtering and verification. Since all Microsoft Teams SIP proxies use an X.509 certificate including the SAN sip.pstnhub.microsoft.com, this value can be configured for static SAN verification.

Abstract During a security analysis of an enterprise communication infrastructure, IT security expert Moritz Abrell identified an “undocumented functionality” (backdoor) in the firmware of Mitel 6...

During a research project, SySS IT security consultant Matthias Zöllner found out that in a standard installation of Windows Office files can be opened directly via certain URLs. This article shows...

The Blind Spots of BloodHound