During a research project, SySS IT security consultant Matthias Zöllner found out that in a standard installation of Windows Office files can be opened directly via certain URLs. This article shows how this works.

When installing Microsoft Office under a recent Windows system, some default handlers for protocols are added. This opens some possibilities an attacker can try to abuse. The following blog post should bring some awareness about the possible attacks.

The following tests have been conducted with the specified environment. However, other Windows and Office versions behave different, e.g. with an additional warning or even with less warnings. There are a lot of possible configurations, therefore the setup was like the following.

Everything was in the default settings as installated.

Those handlers can be found via Settings -> Default Apps -> Choose default applications by protocol.

As can be seen in the following figure, the MS-EXCEL protocol is registered with Excel. This behaviour is not exclusive for Excel. It also applies to Word, PowerPoint, etc.

The following handlers are getting registered:

Registered default handlers for protocls can be also found in the registry under:

By querying the registry, e.g. for MS protocols, we can see a lot registered. NOTE: The following output is compressed.

A detailed description by Microsoft about the Office protocols can be found here.

If this URL is sent via e-mail or pasted in the Explorer, Excel is trying to open the specified file.

Here is a proof of concept (PoC) if the URL is sent via e-mail and clicked by the user.

It was possible to abuse this behaviour at some penetration tests, resulting in a 1-click Remote Code Execution (RCE) if the protection is based on the e-mail appliance and the Office security settings for macros are not configured.

NOTE: In the default settings, a warning is shown when opening the file via a browser, but not when opening it from Outlook. There might be an inconsistency through the programms, allowing access to those protocoll handlers.

As only a link is sent via e-mail, there is no file to inspect for an e-mail security appliance.

Showing the headers of an HTTP request from Excel

If the server hosting the file asks for some authentication, an Excel-internal dialog is shown. As this dialog is integrated in Excel, this might create some additional trust for the user to enter credentials.

On the server side, for simplicity reasons we run the great tool responder with the following command:

This creates some listening services on ports

If we generate a link, pointing to one of those services, we get the authentication pop-up in Excel. 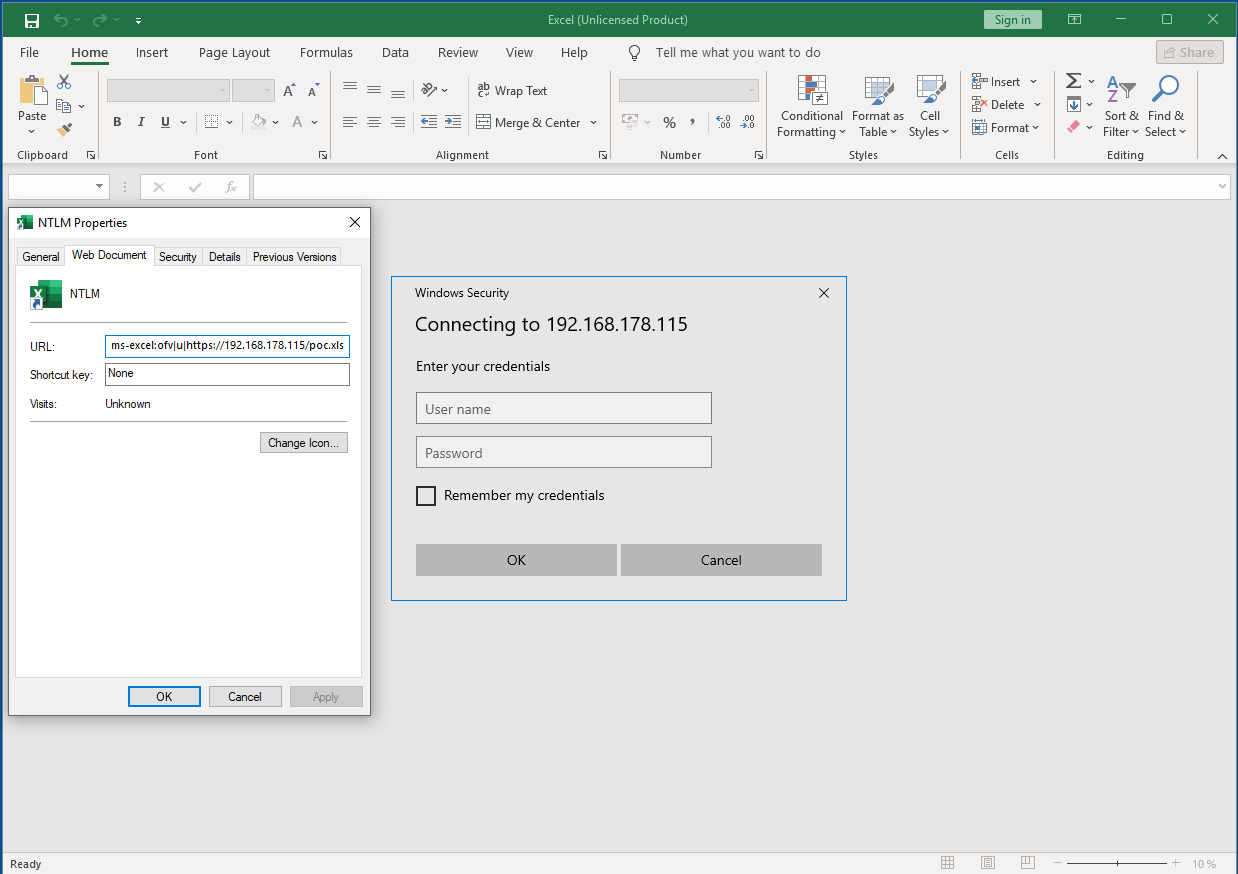 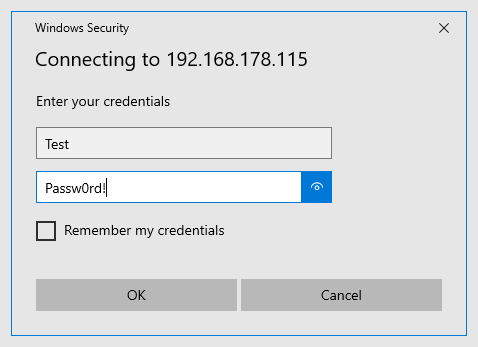 If a user enters credentials here, they are transfered as NetNTLMv2 credentials and can be cracked by the attacker. This of course implies that the password is weak enough to get cracked.

To verify if this is crackable, we can check the password with john.

If the URL is pointing to a server, which can be resolved via the shortname (in this case “spaami”), there is no Windows Security dialog and an authentication with the hashed users (domain) credentials is performed immediately. This situation emerges mostly when the attacker machine is in the same local network, but also attacks over the internet might be possible, if the attacker is able to gain access to a configured trusted domain.

Attacker system is in the same trusted network segment

This is not a new behaviour and some details about this “forced authentication” can be found here.

If we change our responder command to send a BasicAuth instead of the NTLM challenge, we can even receive credentials in cleartext.

The URL for the attack is as follows:

After opening the link again, a Windows Security dialog is shown. 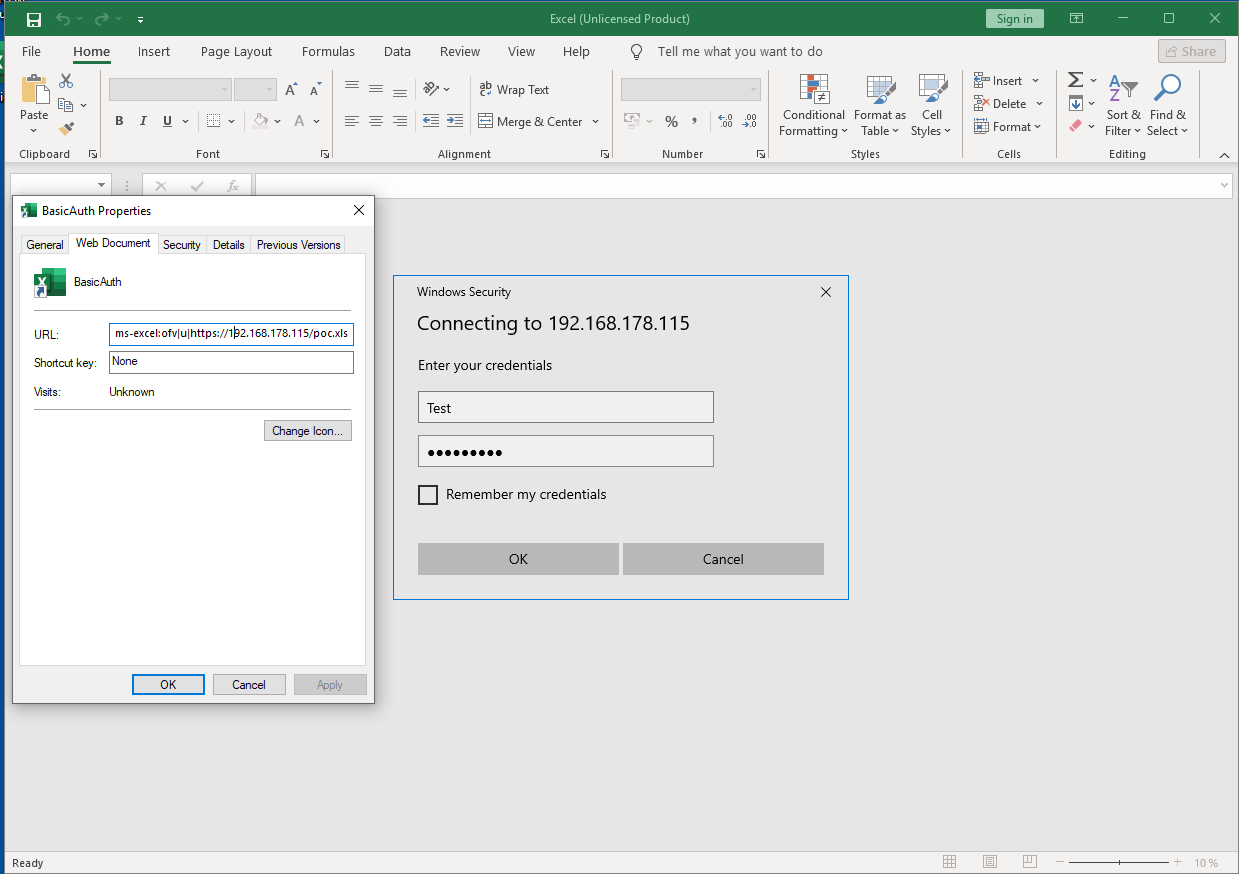 Showing the Excel authentication pop-up If a user enters credentials however, we receive them base64 encoded, and the responder automatically decodes them.

There is no limit on ports and protocols. So, for example, it is possible to use non default ports like 8843.

To easily capture the requests on the server, it is possible to forward them to the listening responder ports. This can be done via iptables or a quite simple socat command.

Additional other protocols are possible, and they also might trigger different behaviour. By using FTP for example, a different dialog is shown. 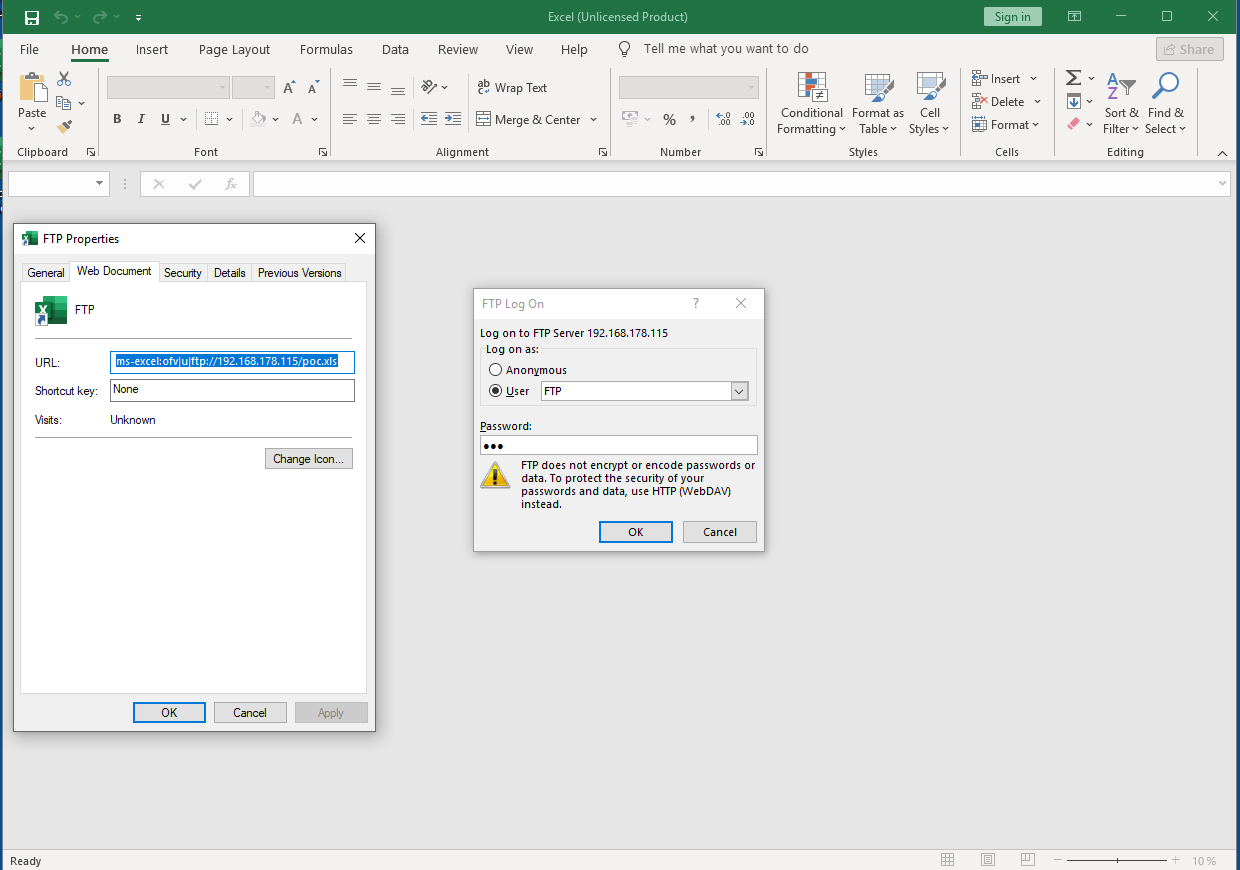 As FTP is an unencrypted protocol, this also allows an attacker to gather cleartext credentials. 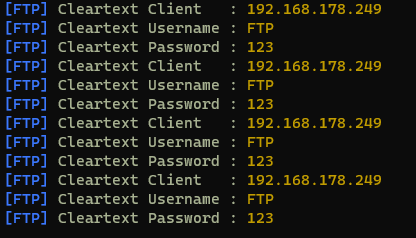 To discover additional supported protocols, a simple approach was used. By taking the list of typical protocols from Wikipedia and the following script and wireshark running on the server side it was verified if any requests are sent.

The following protocols have been identified as working:

And this is only Excel. There is a similiar amount of file types for each Office programm, like Word, Powerpoint, Access and OneNote. This brings back some old attack paths.

A SLK file is quite an old relict and allows code execution in only a few characters. A minimal PoC looks like this:

It is using the XLM 4.0 macros from Office, which might get removed in the future by Microsoft.

Demo showing the attack vector of a SLK file

The same behaviour is working for CSV files with the DDE for code execution.

Showing the warning if the DDE is disabled 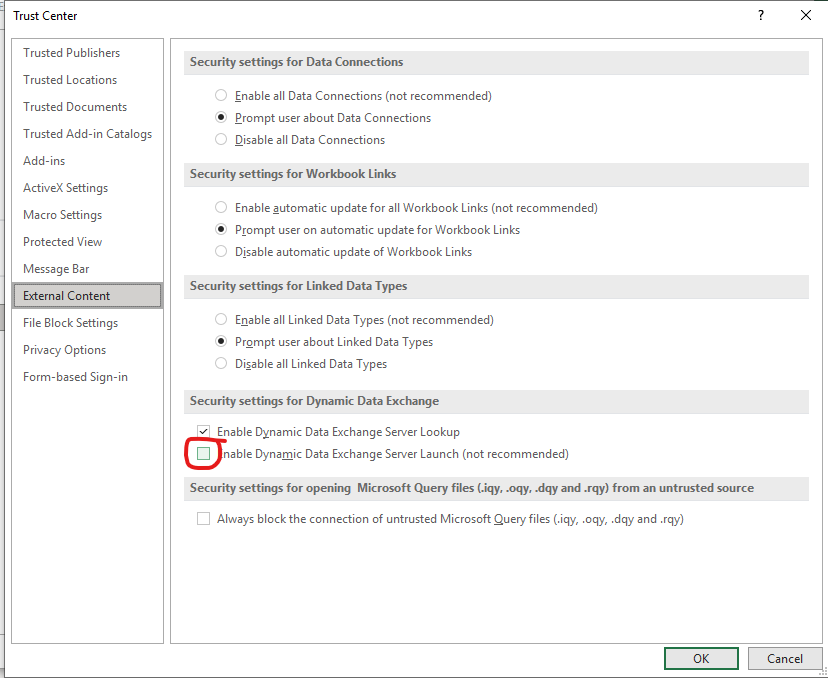 Demo showing the attack vector of a CSV file

Even completely different file endings are possible. Office will happily try to open them und trigger on the content.

For *.txt files, two seperate attacks are possible. Variant a) is to insert CSV content.

Variant b) is just to rename a *.doc file to *.txt and here also Office will try to load the containing macros.

Opening a TXT file and Word interpretating it as doc, containing macros

The possiblity to create a file from a template and provide the default save folder creates some additional attack vectors for social engineering. If a user is tricked to write sensitive content into a file and saves it, an attacker might have immediately access to it, as it is stored on the attacker system (SMB or WebDAV).

Attackers may provide a fake “password safe” in Excel, where the users should store their passwords to store them safe.

The following file was openend via an URL pointing to a WebDAV folder allowing anonymous access. 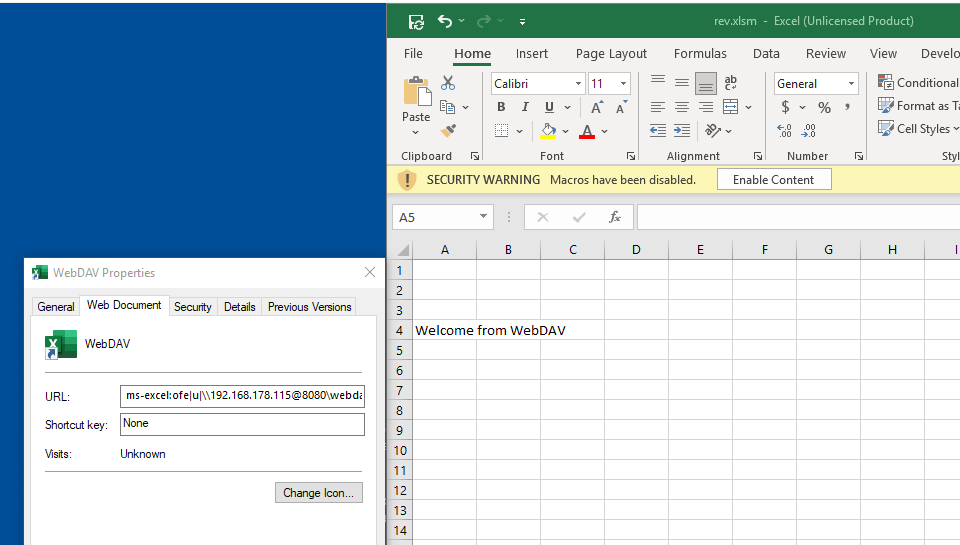 Openening a file on a WebDAV server

By pressing STRG+S or the “save” button, the file is saved directly on the WebDAV server. 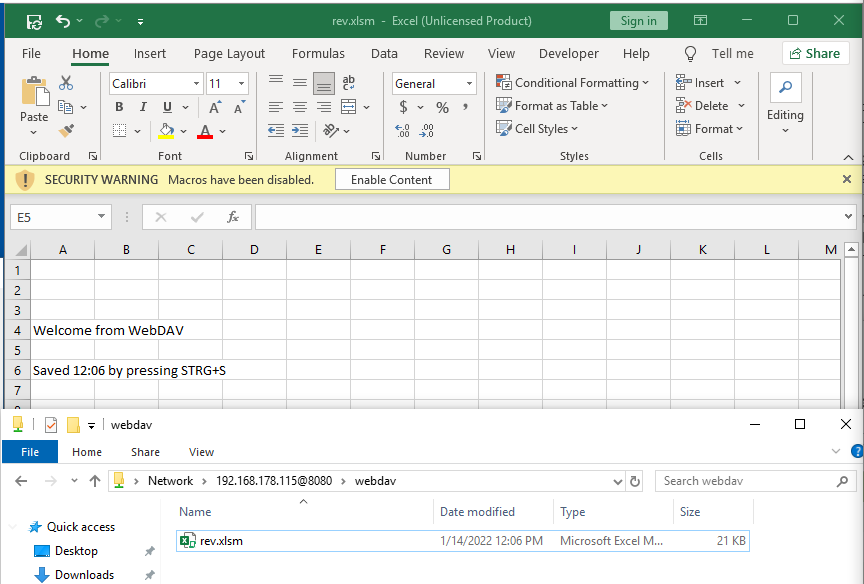 Save an opened file on a WebDAV server

This might leak sensitive data, as the user might not be aware that the file is immediately pushed to the server.

Use automatic fields in combination with data connections

In the template, attackers can provide connections to local files and trick the user into allowing the data connections. Again when saving, sensitive content might be stored inside the Office document without the user being aware of it.

The following document was opened via the WebDAV server and as we can see, the data fields are empty. 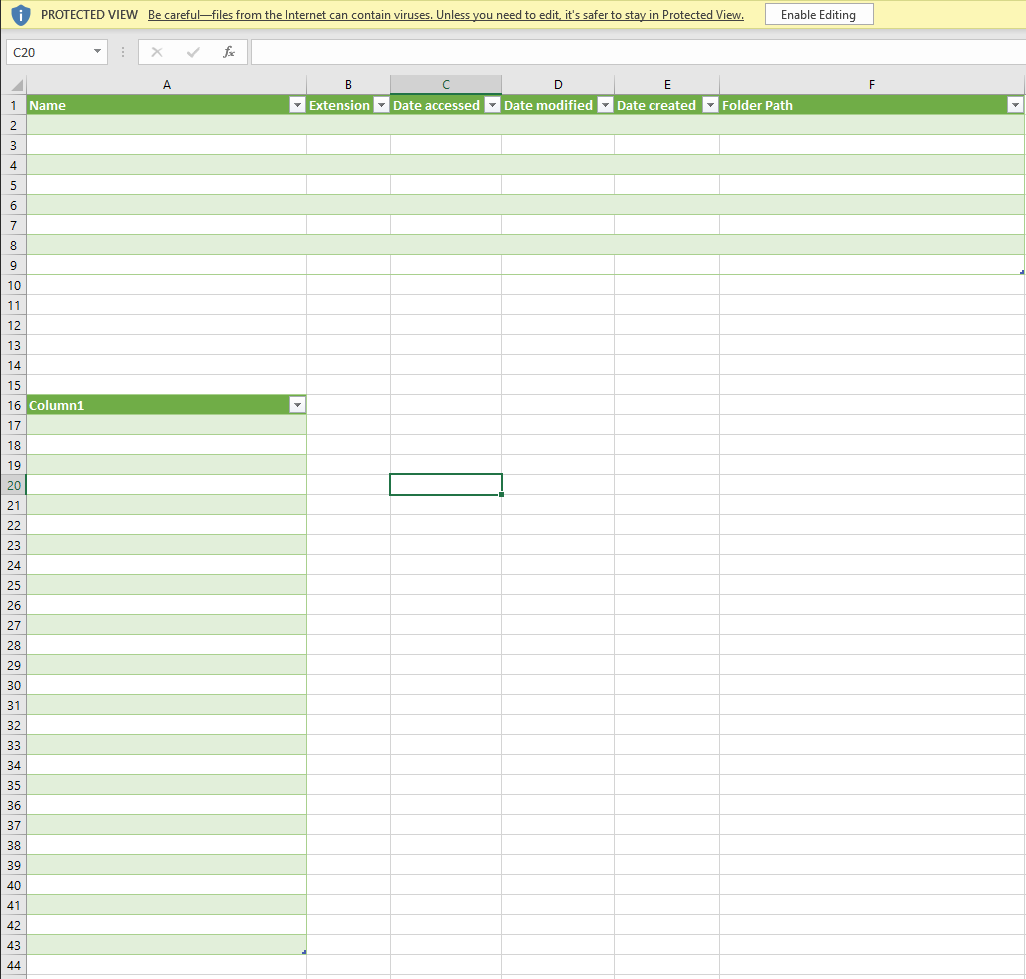 Openening a file on a WebDAV server with data connections

After enabling the “External Data Connections”

some folders and files are read from the local machine and the content is inserted into the document. 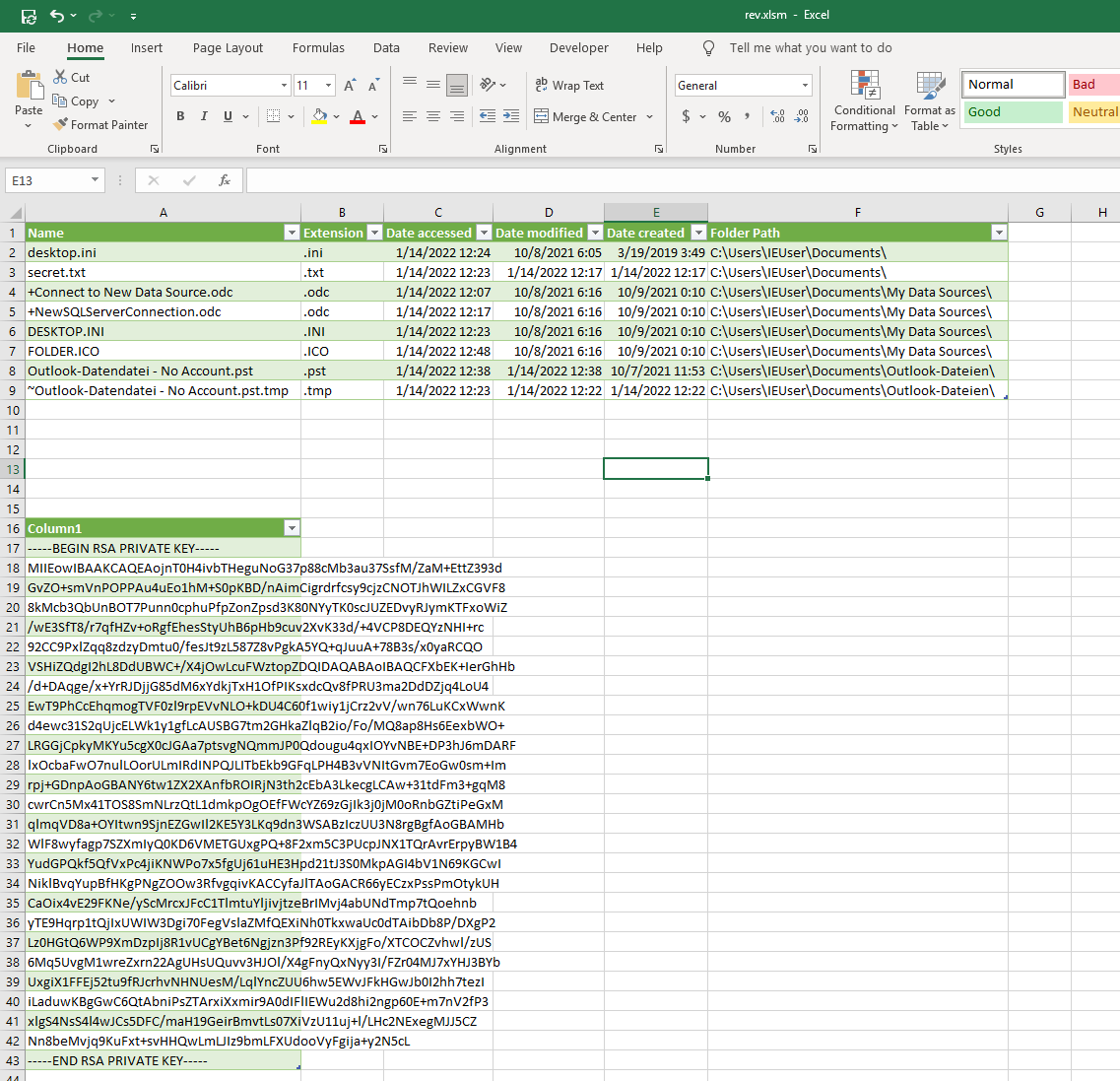 Including the local folder and a local file into the document

This is done by Powerquery as it can be seen in the following two screenshots. Reading a folder:

Configured Powerquery for the users folder

Reading a sensitive file, including the detection of the actual username:

The MS Protocol handler bring some additional attack surface for clients. It should be considered to disable them if they are not in use, however they are normally used by Office 365 and Sharepoint.

If it is not possible to disable them, it should at least considered disabling macros, DDE and enable protected view.

Work and inspiration from others:

In this blog post a few techniques for tampering with Thunderbird attachments, which simplify social engineering (SE) attacks from an attacker perspective, are shown. Introduction Thunderbird unde...